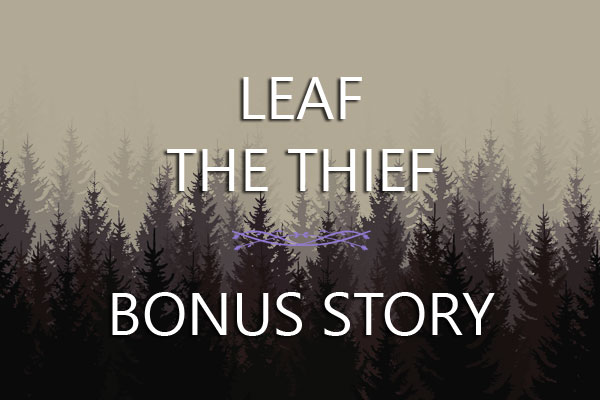 Leaf was a thief. Or more precisely she was a thought thief.

She didn’t steal money or jewels or priceless artworks. Leaf didn’t have any use for these things. Instead, Leaf stole thoughts.

Have you ever had a conversation and suddenly forgot what you were about to say? Or have you ever been told someone’s name, only to forget it a second later? Then you have been visited by Leaf.

Leaf collected thoughts like chefs collect ingredients. In fact, for Niggles, thoughts were ingredients. A sprinkling of forgotten names with a dash of unrecalled words could make the most wonderful juice.

One morning, while Leaf was out collecting ingredients, she came across a small but crowded restaurant high in the hills. Leaf liked restaurants. She loved watching the chefs in their kitchens as they boiled and broiled, and blended and toiled to make the most amazing dishes. She would sometimes steal a few of their ideas for when she made her Niggle Juice back home. Sometimes the ideas worked. Sometimes they didn’t.

It so happened, that in this particular restaurant, a new cook was learning how to become a chef.
“That’s right, a small sprinkling of salt. Now give it a stir.” The head chef was calmly instructing the young cook. “Now, let’s move on to dessert.” The chef guided the young cook to another area in the kitchen. “Here, we will make our elderberry pie…” He paused, picking up an empty jar. “Unfortunately, we are out of elderberries.” He smiled and looked at the young cook. “Do you mind gathering some? There should be plenty around.”

The young cook nodded and raced towards the kitchen door.
“Oh, and remember what I told you.” The chef winked and went over to a large pot of bubbling broth.

This was Leaf’s moment. She didn’t know what the chef had told the young cook, but if it was important, the thought would definitely be delicious. Leaf waited until the young cook was about to remember, before she snatched the thought as quick as lightning.

Back in her own kitchen, Leaf couldn’t wait to try out her brand new thought. It looked absolutely scrumptious, so it must have been quite important. She quickly whisked together the contents of a jar marked ‘The last place I put my glasses’ with a sprinkling of ‘Where I took my school shoes off.’

Now for the magic ingredient! She pulled out the small jar containing the young cook’s important thought. It looked so juicy and appealing. She smiled. This batch of Niggle Juice might be her best ever.

Before pouring it into her brew, she held her ear to the jar, just so she could listen to the thought. After all, it may have been an important cooking skill she could try herself.

“Now remember,” the voice of the chef echoed clearly inside the jar. “Elderberries look like pokeberries, but one is delicious and the other is poisonous.”

Leaf stopped. Uh oh. Perhaps she had stolen a thought that was a little too important.

She began pacing up and down. Should she return the thought? She didn’t like returning thoughts, particularly when they were this juicy.

Her shoulders slumped. Of course she should return it. She couldn’t have the young cook putting poisonous berries in a pie.

She carefully placed the small jar into one of her pockets and raced back to the restaurant.

“Smells delicious.” The chef looked very happy as he pulled a large pie from his oven. The young chef looked quite proud. After all, the pie contained all the fresh berries he had just picked.
“And now, for the best part,” The chef smiled. “Time to try a little, just to be sure it tastes as good as it smells.” He cut a small mouthful to try.

Oh no! As quickly as she could, Leaf uncorked the small jar and gave the thought back to the young cook.

The chef lifted a large forkful of pie to his mouth.

The chef paused and looked over to the young cook.
“I… I only just remembered what you told me about picking elderberries.” He looked terrible. “I think I may have picked pokeberries instead.”

The chef placed his fork back down and a huge grin appeared on his face.
“Well then, I guess pie is off the menu tonight. Our guests will have to settle with ice-cream.” He placed a hand on the young cook’s shoulders. “I’m very glad you remembered in time.”

Leaf let out a huge sigh of relief. Returning the thought was definitely the right thing to do. Unfortunately, she no longer had a special ingredient she could add to her Niggle Juice.

“Say, let’s make the ice-cream a little more special than usual. It’s the least we can do.” The chef walked back to his large pot of bubbling broth. “Do you mind adding half a jar of the cherry powder to it?” He smiled at the young cook. “Just remember what I told you.” The young cook nodded and walked over to the churning ice-cream.

Just as the young cook was about to remember, Leaf snatched the thought away and put it into her newly emptied jar. It didn’t look quite as scrumptious as the last thought, so it mustn’t have been as important.
‘That’s not a bad thing I suppose,’ she mused.

She quickly returned to her own brew. It was still simmering. Carefully, she pulled out the young cook’s new thought and like last time, curiosity got the better of her. She held the thought up to her ear.

“Now remember,” it was the voice of the chef again. “The cherry powder looks the like chilli powder, but one is sweet and one is spicy.”

Leaf paused for a moment…

Then, she smoothly poured the entire bottle into the pot and smiled.

Yes, this batch of Niggle Juice would definitely be her best ever.