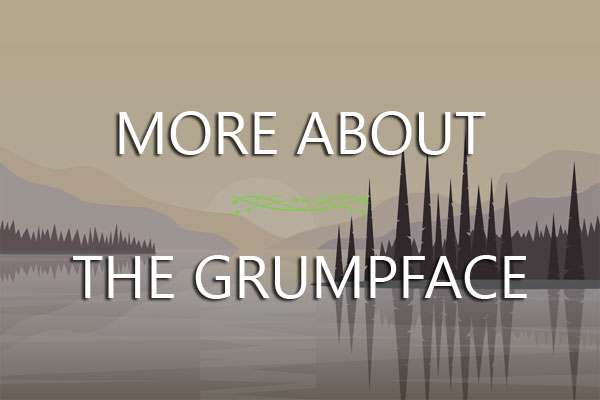 Rumour has it, that the mysterious creature known as the Grumpface, was once an old and cranky headmaster of a small school in Mosswood Village. Known far and wide as a cold and grumpy old man, children and teachers alike went out of their way to avoid him.

On one fateful day – or so the legend goes – he happened across a wizard who had politely asked him for directions to a nearby village.
‘If you’re lost, that’s your own fault!’ The old man replied.
‘Surely you wouldn’t mind helping a tired traveller.’ The wizard offered, a little amused at the old man’s response.
‘Perhaps if you were smarter, you would have brought a map!’ The old man snapped back, irritated that he’d been forced to speak at all.
‘Perhaps if you weren’t so grumpy, you would have noticed that you were speaking with a wizard.’ The traveller calmly replied, ‘And wizards tend to be very good at teaching unpleasant people a lesson or two.’

The old man narrowed his eyes.
‘I don’t care who you are. I don’t believe in helping people. I don’t believe in pleasantries. And I certainly don’t believe in magic!’ He frowned as hard as he could and turned to leave. The wizard suddenly stood tall and extended his hand.
‘Then perhaps,’ he began with a strangely deeper voice, ‘until you learn to see life as something to smile about rather than grump about, you will remain a grumpface!’ Without any further explanation, the wizard disappeared – as they so often tend to do – and the old man was left looking like a short, fat, grumpy-faced creature. Of course this did very little to give the Grumpface something to smile about and instead he retreated to a nearby forest where he wallowed in his grump.

Over time things only got worse. The Grumpface became so irritated with happy travellers passing through his forest, that he devised a plan to prove to them all that life was indeed most unpleasant. He would challenge every person he came across to three tests (he was a headmaster after all). Those who could not pass a single test would be trapped forever within the dark forest. A long and cruel reminder that life isn’t, and never will be fair. It wasn’t long before travellers began to avoid the forest of Ho. Soon enough, the story of the Grumpface became just another fireside story and eventually faded into myth.

For many travellers though, the myth remains just real enough for them to take the long way around to each and every village. It would be a daft traveller indeed who would willingly venture into the legendary forest…