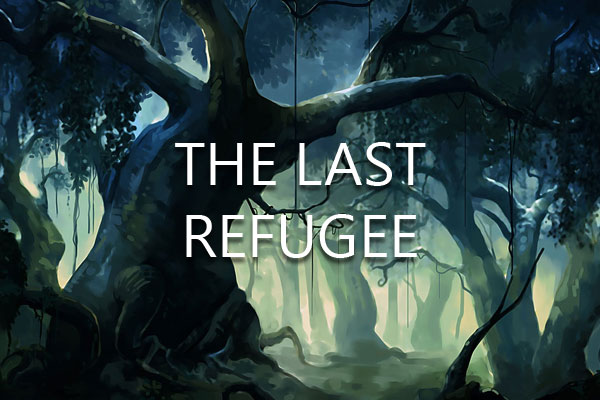 From the Annals of Athema

by Faenlar Aletha, Order of Naru

Although the moon was full, it shone in vain. Dark clouds reached like fingers across the sky to hide its light and diminish its power.

Ethron scrambled desperately as his footing gave way and sent small stones tumbling down the steep embankment. He had chosen a poor path, but that could no longer be helped. Time had not been favourably offered to him in this particular matter – when fleeing for your life, it rarely is.

Despite the fact that his legs burned and his lungs heaved uncontrollably, he could not stop. Just a few short hours ago, Inquisitors had swept through his town in the dead of the night. People had been dragged screaming from their beds. Those who had woken to the commotion would have known instantly what was happening. Ethron certainly did.

It was the scream of his next door neighbour that had woken him from his deep slumber. She had pleaded with the intruders to spare her life. She had desperately tried to persuade them that she had no knowledge of magic – that they were mistaken – that she was a simple maid.

She lied. But what more could she have done? The Inquisitors were powerful. They could shield their own form, energy and essence well. They could see magi like a wolf could smell fear. And they were merciless.

Ethron took nothing. Before his own door had even been tested by the Inquisitors, he had climbed through his window and fled into the nearby trees. Darkness would be his friend tonight. It would cover his escape, even if it obscured his path.

Eventually Ethron stood before the Elverstill – an ancient temple complex claimed hundreds of years ago by the Church. Built like a fortress, it once would have housed thousands of magi, apprentices, servants and pilgrims. Now it was the refuge of perhaps a few hundred.

Originally, the priests had been trustees of the Church. In the beginning, these members had been zealous for the relentless cause of the See. They had plundered the temple and sent anything of value back to their masters. Yet over time, the remote location of the Elverstill made the priests undesirable of such duty, and it became more of a punishment than routine service. This was how the magi won the first battle.

By entering the ranks of the priests, the magi were able to soon regain control of remote towns and ancient temples. The infiltration was so successful that some were even able to claim higher positions of influence. This allowed them to oversee priestly duty, and by Ethron’s time, forty priests tended the church – all of them magi.

The second battle would not be won for many years to come. At that time, the plan to discredit the Inquisitors themselves was something only whispered about in the darkest corners of Rome.

Ethron brought his fists down heavily upon the high oak doors. At least one or two priests would be doing the rounds. It was their duty after all. After a minute, one of the doors creaked open and Sylmore the Second (although he was not yet known by this name) looked down upon Ethron.

He must have looked a sight. Before him stood a thoroughly dirty and bloodied form wearing nothing but his undergarments. At the time, no one would have guessed, but standing at the doors of the Great Hall was the only survivor of Caravel, and the last refugee of the Elverstill.